Around 1870 the first German-Bohemians arrived in New Ulm. Many of them settled near the river along the southern boundaries of the town, in an area that came to be called Goosetown – for their practice of keeping flocks of geese. In 1984 an organization developed to study their ancestors, with an effort to create a monument to honor those same people.

Erected in 1991 to honor immigrants from the area known at the time as Bohemia (now the western Czech Republic), this 7 1/2 -foot-tall granite monument features a statue of a father, mother and child. On the back, the parents legs are raised to represent their love of music and dancing, valued traditions brought from the old country. On stone pavers at the base of the monument are the names of 350 German-Bohemian families who settled in New Ulm.

Location: In German Park at Second North and German Streets 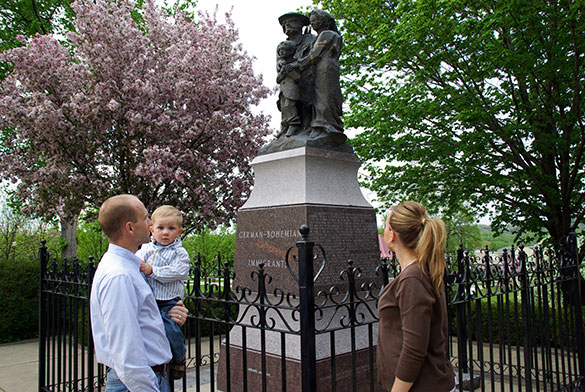